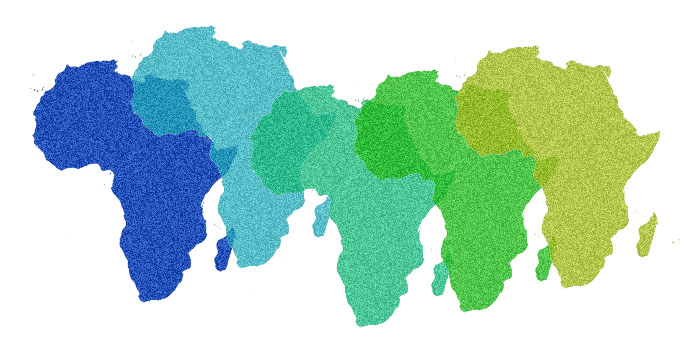 There is a dazzling array of languages spoken in Africa. The claim is that there are 2000+. Communication across such a huge population is certainly daunting. However the cultural richness within the multiplicity of languages is also a fundamental topic. It is nothing for individuals to speak several even during a single interaction. Switching between tribal tongues, national language, lingua franca & the western languages of colonization is impressive. For example, in Zambia, English is the official language. It is not uncommon to hear a street merchant negotiating in English while carrying on a side conversation with an associate in his country language & jumping back & forth between his/her ethnic dialect & another tribal language too. All the while being considered illiterate.

Although many languages are endangered or spoken only by a precious few, millions speak Arabic, Swahili, Amharic, Hausa & French. Nigeria alone has approximately 248. Most are unique to Africa: Berber, Twi, Wolof, Zulu, Bemba & the Khoisan/Click languages while cultural imperialism gave rise to English, Spanish & Portuguese during the lengthy subordination of African histories. The northern parts of the continent saw the hegemony of Islamic religious imperialism in the form of Arabic while southern Africa was dominated by Germanic Afrikaans. It is perplexing that official languages are often foreign.

Politics, law, religion & culture underpin the language dilemma in Africa. The residue from occupying regimes & the choice of one tongue over many possibilities causes discord. Fortunately the majority of African people have not been touched by the sweep of European language.

Literature, commerce, prayer, free press, education depend on good language. Regionally people seem to adapt but sweeping across the continent large communities are not able to talk to each other. There seem to be two irreconcilable trends in language: globalization, which tends to retain Euro languages for a better market economy; good governance, which encourages faster education & traditional values, helps poverty eradication & encourages social justice. Non-local language of instruction is a barrier for the masses. To eradicate poverty is only possible if knowledge & technology are taken to the masses in their own tongue. Also language is the most politically powerful weapon in human relationships.

Language is a uniquely human gift. Its diversity shows how ingenious Africans can be. It shapes the way we think & defines our perception of the world & each other. How we build, what colors we use, how we count changes from place to place. For example, French keeps Gabon a satellite of France. It is pervasive in all social interaction, as well as, economy. More personally, we are finding it a complex issue to characterize each different culture with photography when we are not even speaking about the same things. We have to reinvent the dialogue on each trip. Part of our mission is to delve more deeply into this problem.