Herdsmen and hunters, Berber tribes found refuge in mountainous regions of Northern Africa, surviving several invasions during the course of history. It is believed Berbers have existed in Northern Africa since the beginning of recorded history of the area. Two out of every three Moroccans are Berber descendants. Their social structure is tribal with a leader appointed to lead the tribe. Most of the tribe leaders are men, though many women like Tin Hinan and Tazoughert are known to have governed their tribes.

BACK TO ETHNOGRAPHIC MAP

Here is a collection of panAFRICAproject images by Lou Jones pertaining to the ethnographic group of "Berber": 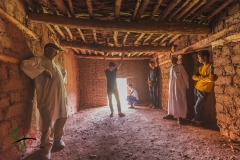